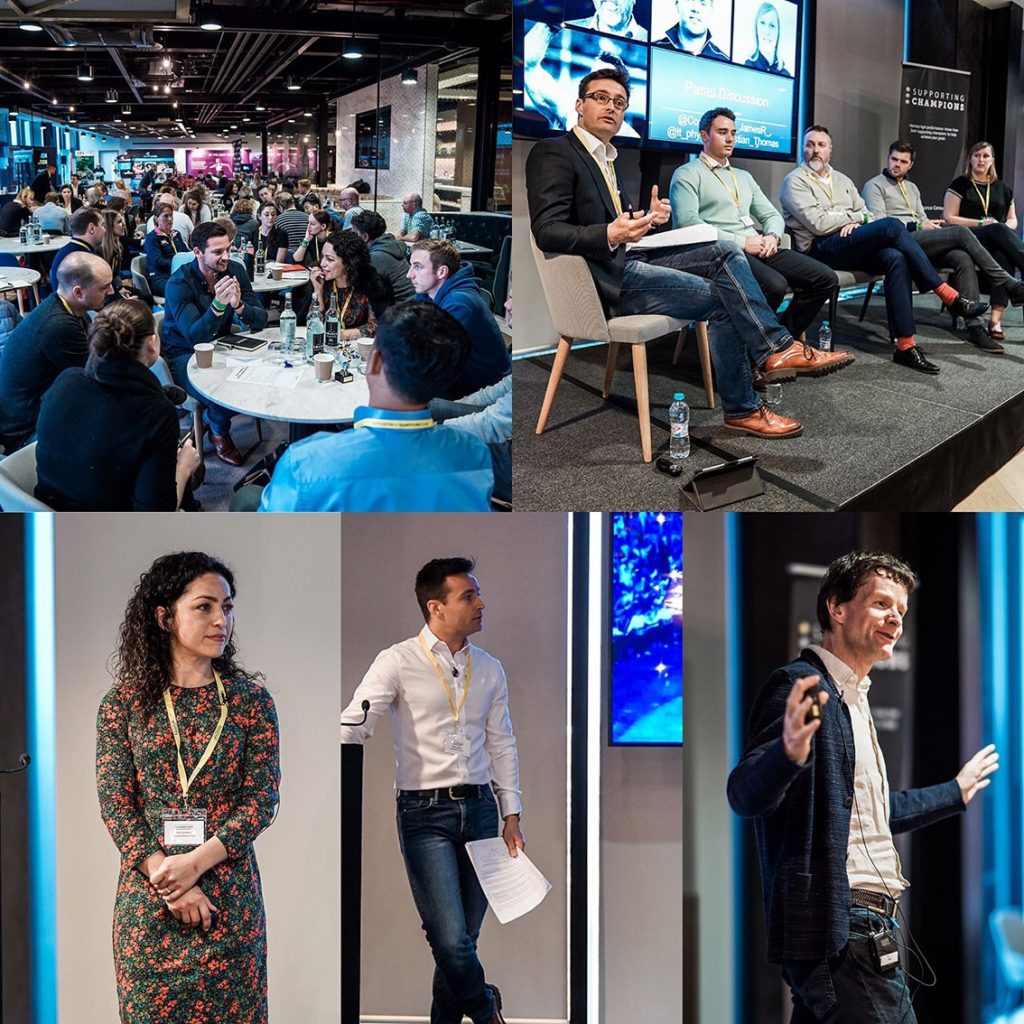 On 19th & 20th March 2019 150 performance minded people gathered at London’s Olympic Stadium for the Supporting Champions Conference. The conference focuses on the ‘finding a better way to create high performance’.
There are plenty of conferences out there at the moment, and we don’t specifically state the conference is going to be about coaching or nutrition or management, per se, there are plenty of conferences that offer some technical learning and they’re important. But when it comes to creating, nurturing, hoping, planning, innovating, delivering and recovering and sustaining performance, we’ve seen over the years that it’s rarely the technical that makes the big difference. It’s the blend of the technical with deeply effective, continually evolving craft skill that creates healthier high-performance. It’s the subtleties, the complexities that makes the difference, and so the answer probably isn’t in a journal or a single course or even one heard at the conference. But it lies in you to find that answer and to act in your context with the people you work with to the mission you’re on. Our conference focuses on hearing experienced people from a variety of backgrounds share their story and to inspire our delegates to take action and make the change they need and support and champion others along the way.

​​ Dig a bit deeper –
Sign up to get the top 10 take home messages from the conference
Here’s what happened…
Day One
Me (Steve Ingham) opened with asking whether the goals we’re working on feel impossible and I challenged delegates to excite their curiosity to wonder how might something be possible. I retold the story of the post-2012 reboot. The 2012 Olympics and Paralympics was for many the best day in work ever, but the goal from UK Sport/Government in the UK was to win more medals at the 2016 than won at the home games – this had never been done before, by any nation, ever in the history of the games. I shared the journey we had gone on since the home games was awarded in 2005 on how we turned our performance thinking, applied so often to sporting performance, towards professional and team performance. After London, the resounding actions that were effective in galvanising and kickstarting teams were to L.E.A.P – Listen; Engage; Activate; Purpose.
Throughout the two days the superb Rosie Mayes got people networking, flocking, interacting and working. We saw delegates congregate around the area they’re most working on; Strategy and Planning; Innovating and Learning; Collaborating and Communicating; Performing and Delivering; Sustaining and Recovering. Delegates were challenged to reflect on who they’re truly appreciative for along their journey. Delegates were encouraged to make new connections to expand their network of collaborators.
Ben Ryan regaled us with the wonderful tale of how he took over the Fiji rugby 7’s team, in the most inauspicious circumstances while working and trying to manage up to a dictator. He showed us the importance of tuning into the local culture, habits and traditions was essential for making meaningful change.
Ben (another one) Ashworth reflected on his eminent career providing physiotherapy support to some of the top sporting teams including Arsenal FC. He reflected about his ‘bull in a china shop’ approach to persistent injuries and how ineffective it was in building relationships and in turn creating change.
Mike Collier shared his journey into Formula One, supporting drivers such as Fernando Alonso and Jenson Button and how he is embarking on the role of Head of Human Performance at McLaren Applied Technologies. He shared insights into the novel approaches his team were taking in developing young talent, of particular interest was how they were exploring E-Sports (driving games) as a talent pipeline for Formula One!
Cath Bishop wrapped up day one with a stirring speech fusing her reflections on a career in Olympic rowing, winning a silver medal at the Athens Games and operating as a diplomat in numerous war zones. The commonalities in approach were the necessity for; 1) Clarity – what are you here to do; 2) Constant Learning – the willingness to nurture an evolving mindset and skill; 3) Collaboration – harnessing the true power of teamwork
Day Two
We started day two of the conference with an inspiring story from Anthony Bennett – young man who caught a deadly viral infection, was resuscitated 12 times only to tell the tale of realisation – realisation that we need to appreciate and celebrate the wonderful world around us, the power of seeing opportunity in a different light – a chance to create a brighter future
Tim Harper set up Harper Performance to work with sports people and organisations with limited resources or those hamstrung by logistical, economic or cultural challenges, to combat inequality in elite sport and support aspirational sportspeople from disadvantaged communities. He challenged the delegates to problem solve for the underdog by asking groups to propose solutions to their most pressing problems around the key themes of the conference; Strategy and Planning; Innovating and Learning; Collaborating and Communicating; Performing and Delivering; Sustaining and Recovering.
Eva Carneiro laid out a clear challenge – to be the future guardians of a better way to create performance. Care OR performance is not the equation to balance – care AND performance is. We operate in a world heavily guarded by legal terms that require us to provide care and security to the people we manage and serve. With the general trend towards de-regulation, we all need to be much more aware of the legislations. Beyond all of that we need to be pulling in the same direction, to be active in doing everything we can to eliminate toxic cultures, “Silence encourages the tormentor, never the tormented. Sometimes we must interfere.” Elie Wiesel
The panel discussion began the afternoon, welcoming Olympic medal winning gymnast, Kristian Thomas: Professor of Coaching, Chris Cushion; Tottenham FC first team sports scientist James Redden; and Saracens RFC physiotherapist, Laura Tulloch. We started off the discussion by hearing about the varying cultures in different environments and under different leadership, Harry Redknapp at Spurs was laissez faire, under Pochettino much more structures. At Saracens the owner had driven at a positive culture not because something was wrong at the club – but because it was the right thing to do. Kristian described the differences in environment and sophistication pre- and post- international medals, while Chris Cushion challenged the audience by questioning some of the many precepts we hold as expectations and traditions as being largely a figment of our own assumptions.
Kevin Dutton to the conference to the finish line with a romp through the mind of psychopaths. Starting off by sharing some of the qualities you would typically observe; narcissism, focus, ruthlessness, impulsivity, charisma, emotional detachment, fearlessness, calmness under pressure – and then proceeded to give us all a test of how we faired on his psychopath scales (low to medium for SC delegates). These characteristics are like a graphic equalizer that are all dialed up for the psychopath – how can we dial up the right ones at the right time to suit our needs?
Dig a bit deeper –

Sign up to get the top 10 take home messages from the conference
Until next time
Thank you to all our fantastic speakers!
Thank you to our superb exhibitors – Precision Hydration, Sporting Edge, Elite Athlete Centre and Hotel, Perform Better, Vald Performance, Athletic Greens and Harper Performance!
Thank you to the team for putting the event on!
Thank you to all the delegates from sports, business, education and the arts – from all over the world.
Posted in Uncategorised
← 031: Louise Minchin from the BBC Breakfast Sofa to GB Team Triathlete032: Joe Eisenmann on long term athlete development →