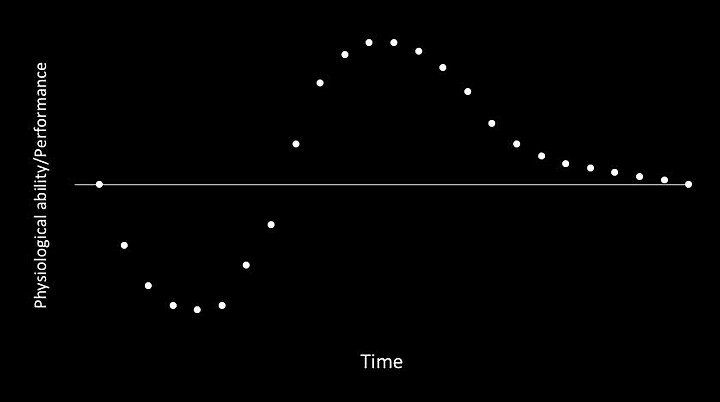 It is by going down into the abyss that we recover the treasures of life.
Joseph Campbell
As the World Cup tournament swings from group stages to the knockout stages – for the bigger, stronger teams there is a shift from a mentality of “collect enough points to advance and conserve energy if you can”, to “all-in”. In the early phases of preparation, teams will have had a mini-cycle of renewal and development that would follow the end of the domestic and continental competitions. Within days the international squads are announced, and some teams will choose to gather straight away, but more commonly there is a period of rest – essentially the only window of opportunity to have a break before preparation begins. Teams then have about 3-4 weeks before their first game, during this time the opportunity to put some credit in the bank must be taken – this means investing in some fitness work alongside the tactical, technical development and of course the final selection showdown.
During this phase management must carefully balance the need to gain a boost in fitness without compounding the cumulative fatigue built up from the season. This delicate balance will continue early into the tournament as;
The application of recovery aids (different from light sessions that are often used in the days after playing/training) needs to be carefully considered during the preparatory and early competition phase. As with some methods there is controversy as to whether techniques such as ice-baths or compression garments actually reduce the stress and therefore the adaptation experienced from training and playing (see Howatson, Leeder and van Someren for an excellent review). This is based on the principle that in the early stages after exercise (or a stressful) event the body’s first job is to cope with the damage, then restore and only then does it adapt to new, stronger capabilities.
Essentially, the judgement comes down to a choice and judgement;
(A) Can we afford to let the stress and fatigue from playing/training hard resonate for a little longer so that the players adapt a little further (priority = ADAPT to new level)?
OR
(B) Do we need to minimise fatigue and stress from playing/training so that the players are fresh and maintained, where we don’t need them to be adapting any further (priority = RECOVER to previous level)?
I would suggest that (A) is the priority in the early training camps. As the tournament begins, (A) is still a priority in the first few days after games and certainly for non-playing players (case in point Mexico, Belgium, England resting players to ensure full recovery, restoration and small but notable adaptation in a window of 10 days). However, as the knockout stages commence, as teams begin to progress, and in particular the intensity hots up, potentially the duration (extra-time) and significance of the matches increase the chances of cumulative fatigue increases. Therefore, the decision switches to solely (B) – recover at all costs. Under these circumstances the opportunity for adaptation is minimal and crucially the potential risk of carrying over fatigue into the next (even more important) match is too high. It’s all about fatigue management from here on in!
We can apply this approach to our everyday lives. When time is a bit freer, we can invest in developing fitness, taking full restoration, as well as learning and development. When we’re under pressure and demand is high, micro-doses of rest during the day or power naps, eating well, investing restorative techniques, such as deep-breathing can maintain performance or in other words stave off the accumulation of fatigue.
The chances are that the final will not be completed by all a team’s key players and the chance are that fatigue will be highest at the end of a tournament, even against the backdrop of elation and excitement of making it towards the final four. The question comes down to making the decisions that occur 6-8 weeks or 3-4 weeks prior to the big moments to do everything you can to be the freshest you can be so that you can perform at your optimum at the moment that matters most.
This is a ruthless world and one must be ruthless to cope with it.
Charlie Chaplin
*In this series of World Cup themed blogs, I’ve explored how the early group phases are a celebration and connection of our world’s countries – advanced through technology; and I’ve looked at managing the void of time that creeps in when ‘on camp’, and how best to manage it.
Posted in Get Skills, Sporting Performance and tagged AppliedPractice, Leadership, Mindset, PerformanceInsights, Preparation, Recovery, SportsScience, Stress, Teamwork, TimeManagement
← Time, the hidden menace at big competitions and how to harness it012: Liz Stokoe on science and art of conversation →